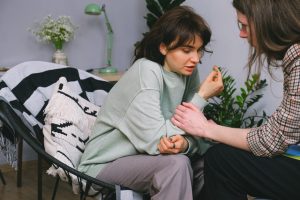 When you feel rejected by your partner, how do you react?

Do you withdraw and show indifference? Grow clingy and demanding? Become angry and accusatory?

Acute stress response, better known as fight or flight, is an instinctive response to situations that your brain perceives as threatening. By releasing large amounts of adrenaline, our bodies are equipped to face all kinds of dangers with the energy to flee or the aggression to protect.

However, this same instinct often compels us to react to emotional threats with similar intensity. When fear rises after rejection, sensing potential loss, we may become defensive, excusing our behavior, criticizing, attacking our partner, reluctantly conceding, or creating an emotional distance. If a partner seeks to manage us, we may fear a loss of identity, and resist that control by pulling away, placing blame, or arguing.

While fight or flight may be an asset to survival in perilous situations, in relational plights it is more often problematic. The responses we instinctively exhibit are likely to stir the same fearful fight or flight response in our partners. As one partner fearfully fights the face of rejection, the other flees at the imminent threat of control, leading the first to fight harder to cling to the relationship, and so on. For a relationship to flourish, this cycle needs to be broken and replaced by compassion in moments of perceived emotional dangers.

So when fight or flight kicks in, how can you substitute your detrimental reactions with productive ones?

How do you stand up on your behalf in love without behaving contentiously toward your partner?

1. Recognize the sensations that indicate that you feel distressed or panicked. Address those emotions quietly before reacting to them outwardly.

2.   Practice deep breathing exercises to calm yourself in moments of friction and disagreements.

3. Listen to what your partner shares without allowing defensiveness to overtake you. Do your best to discern what is being communicated before responding respectfully.

There are many ways this may play out in action:

If your partner is reacting with a traditional fight or flight response, you could acknowledge that these behaviors stem from fear and counter that with compassion. Ask what (s)he is afraid of and listen without judgment to learn. This simple maneuver may help to neutralize the situation while positioning you to better understand your partner and increase your connection.

Should your significant other be unable to speak respectfully and calmly, you might suggest, with kindness, that you both take time to walk away and breathe before addressing the issue again later.

In moments when your partner has become detached, you may recognize that emotional pain and nurture your heart by going out to do something that you find refreshing.

Being cognizant of the body’s fight or flight instinct enables you to reflect on moments of fear in your relationship and make healthier choices. Diffusing a contentious argument by seeking to learn, taking a break to examine the matter, or spending your energy on self-care can all interrupt unhealthy, fear-based, relational patterns. It may take discipline to replace ingrained responses to stress with compassionate alternatives, but the benefits far outweigh any cost.

Fight the fear and restore the peace in your relationship today!