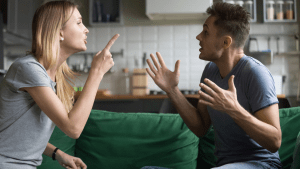 So far, we have discussed Contempt and Criticism.  Check back to my previous blog to learn about these destructive behaviors. The two remaining horsemen behaviors I will discuss here are Defensiveness and Stonewalling.

Defensiveness is a self-protecting behavior by way of either righteous indignation or innocent victimhood.

This behavior is usually in response to a spouse feeling accused or unjustly criticized. Counter blame is used as an excuse to try to stop their partner from criticizing. This strategy is highly unsuccessful, however and the conflict usually continues to escalate without resolution.

Here is an example of a defensive interaction:

“Did you take out the trash this morning like you promised?”

Instead of responding defensively, try really listening to what your spouse is saying hear their request or concern.  Take responsibility for yourself and ask forgiveness if necessary. Be compassionate.

For example, “Oops! I forgot! I’m sorry. I know that was important to you. I will do it as soon as I get home.”

For the spouse bringing up the concern, think about what is your goal? Is it helpful or harmful? What is the underlying problem? Is there a deeper issue? Express your feelings and use “I” statements.

Stonewalling is a protective behavior that is toxic within a marital relationship.  Stonewalling happens when one spouse withdraws or shuts down during a conflict in an attempt to close off the other person.

This fight or flight response results from one partner feeling overwhelmed or psychologically flooded with emotions and they feel they are unable to respond except to tune out of the situation and become unresponsive to the other spouse.

Sometimes it is an attempt to try not to make the situation worse. The result, however, is that the other spouse becomes more escalated until they eventually check out too.

The silent treatment is also a type of stonewalling where a spouse limits conversation to a minimum or none at all, essentially closing down any connection with their partner.

This behavior is a result of the other three- contempt, criticism and defensiveness. It takes a while to develop but once it does, it becomes a habit.

Instead of stonewalling, make a plan in advance to give one another a neutral signal, like raise a hand, to indicate flooding. Agree to take a break from each other and the conversation for at least 20 minutes. Use the time to calm yourself.  Come back to the conversation and try again.

Together we have explored the four most toxic behaviors in a marriage called the Four Horsemen- Contempt, Criticism, Defensiveness and Stonewalling. When present, these behaviors are certain to lead to destruction! But once identified, you can begin to STOP their devastating effects in your marriage!

Be sure to read my previous blog to read about all of the horsemen!

Have you been able to identify any of these in your marriage? How have you stopped these Four Horsemen from destroying your relationship?